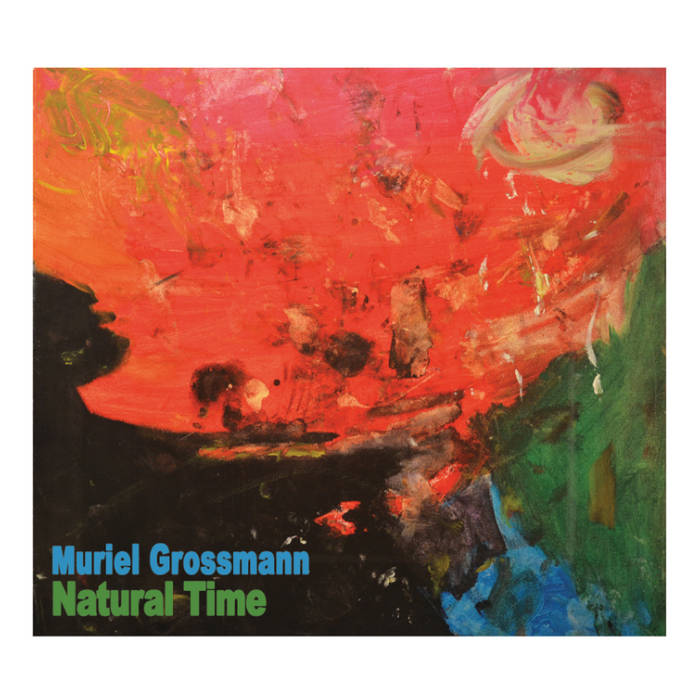 When I was asked to write liner notes for this record, I met with Muriel Grossmann to hear the music and make the interview. Listening to the Natural Time record in its entirety, was indeed an experience, like traveling without moving, and I could not help but think, that there is a link to what somebody once said: “There’s a lot of modal music, that is played every day throughout the world. It’s particularly evident in Africa, but if you look at Spain or Scotland, India or China, you’ll discover this again in each case. If you want to look beyond the differences in style, you will confirm that there is a common base. That’s very important. Certainly, the popular music of England is not that of South America, but take away their purely ethnic characteristics — that is their folkloric aspect — and you’ll discover the presence of the same pentatonic sonority, of comparable modal structures.”

The link was not only confirmed, but also broadened during conversation, through another aspect that is equally important to the artist. “For me Natural Time is about bringing forward the essence of ones nature. You have kept your path and one day, everything comes together. In Music it is like in life. It feels like, when living according to that inner call, your energy is having direction. You just know, what you have to do, each step you are taking feels to be at the right time. Same goes for this record and tunes, particularly in Peace for All and Your Pace, it elaborates on the same thought of making things right and bringing forward the best in yourself, other people and the situation you are in. As for African Dance, it’s a homage to this abundant land and it’s great people, while Happiness is a meditation on happy thoughts from moment to moment.”

Finding the right musicians was an important part in the making of Natural Time, musicians who play it peacefully but intense. “I’ve played with Uros Stamenkovic many years ago in Barcelona, before he went to live and play in Toronto, but on his way back to Europe, we started to play a lot more together — a great musician who knows to play for the group and knows what music needs. As for Gina Schwarz, we know each other from Vienna where we played with different groups. Her strong bond with music comes through with every note she plays. With Radomir Milojkovic I have worked for so many years and we made a lot of music together and yet every new record is a new adventure. This time it turned out to be about voyage, open space, driving through woods, desert, mountains, near seaside. We were also trying to implement different kinds of instrumentation and sets of musical drones to the compositions like sarangi, flute, harmonium, bells and others, as we already introduced in our previous album ‘Earth Tones’ DR 07 CD.”

What works good for the conclusion of this liner notes, is what Muriel Grossmann said to me at the end of our conversation. “Natural Time is a simple true message, simply played for people like you and me.”
J. C. Sanders

IMPROJAZZ, France Jun/2018 by Marc SARRAZY
Like a handful of cherries dancing at the end of the branch, prey to the wind, a few notes of beaded, suspended guitar that rock and rise. Who is calling a rhythm like others would perform a rain dance? Thus, in a few seconds, a real musical incantation takes shape that suddenly takes flesh by the thunderous arrival of the tenor saxophone. We have all seen, one winter day closer to the hearth, a bunch of flames instantly born from a carpet of glowing embers, take shape and begin to swell, spinning in a crazy dance, growing, inexorably amounting. This picture, this story, is the one told by the album Momentum and this, from the very first measures of the inaugural piece, the aptly named “Elevation”. The music, initially evanescent, embarks on a perpetual, almost spiritual quest, which inevitably rises to the sound of a primordial groove, supported by the sturdy swaying of the double bass play and by the odd structures attracted by the rhythmic excitement of the drummer.

The pieces of the disc often come close to the ten minutes; it is the ideal time for the musical work to present itself blooming in the reminiscences. The ideal time for light saxophonistic fevers spinning in its own drunkenness, because the improvisations unfold freely, inside the rhythmic waves and the effervescence sound. The pieces follow each other, the harmonies come into resonance and reverberate, “Momentum”, as an evidence, “Chant”, natural and universal, “Sacred”, a true hymn turned to the passion for freedom, the incandescent “Horizon”, the powerful “Rising” that responds as an echo to “Elevation”, finally “Gratitude”, as a thank you to the master, lucid and serene. By its structure indeed, its flamboyant path, its moving chants and the solar flights of the saxophone, Momentum can be read as a poignant homage to A Love Supreme.

Muriel Grossmann, who had embarked on a rough free jazz in the late 2000s, crossing the roads of Joachim Kühn and Wolfgang Reisinger, began to refocus on her quartet training with guitarist Radomir Milojkovic, faithful accomplice of the saxophonist: he develops a pointillist game adorned with sparkling trills, who also stubbornly works the resonance of a single note in the manner of … David Gilmour. With the team of Gina Schwarz and Uros Stamenkovic the group has found its ground and the Coltrane aesthetics, initiated since the excellent Earth Tones (2015), was confirmed with Natural Time (2016), a record just as deep, and today with Momentum, the trilogy has found its culmination.